Catherine Heard directs the World Prison Research Programme, at Birkbeck’s Institute for Crime & Justice Policy Research. The research team monitors trends in world prison populations and examines the causes and the consequences of rising levels of imprisonment. The Institute’s latest comparative research on the sentencing of burglary, drug importation and murder highlights vast disparities between different jurisdictions in their approaches to custodial sentencing across a range of offences. Here, Catherine discusses some of the most striking disparities.

Imagine being convicted of a crime in another country, where the sentencing framework is very different to the one in your home country. For drug trafficking, you could be looking at life imprisonment and a hefty fine if you were sentenced in Thailand, but be home within months if you happened to be in the Netherlands. 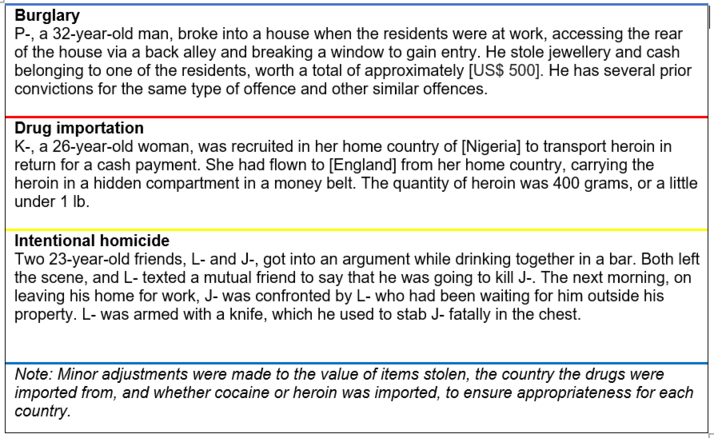 For the domestic burglar P-, non-custodial options would have been possible, even likely, in most of the ten countries, without the aggravating factor of his previous convictions. (His chances of avoiding prison would have been all the stronger if P- had pleaded guilty and made reparation.) But because of his prior offences, P- would probably get an immediate custodial sentence of several years, with three or four years likely in most countries. Only in the Netherlands would P- have a real prospect of avoiding prison, if his lawyer could convince the court that custody would serve no purpose and P- had better rehabilitation prospects in the community.

The most striking degree of disparity was found in the drug importation scenario. K- would be likely to receive a life sentence in Thailand, a 20 year term in India, 15 years in South Africa, and between five and 18 years in most of the other countries. Again, the Netherlands was the exception, with lawyers estimating her likely sentence at around four months.

In six jurisdictions, K- was also liable to receive a fine on top of custody: in New South Wales, the fine could equate to almost US$700,000 (but would be in the court’s discretion). In Brazil, a minimum fine equivalent to around US$3,500 would apply. In Kenya, South Africa, Thailand, and India, non-payment of the fine would probably mean extra time in custody. In Brazil it would mean removal from the electoral roll and losing the right to work.

In the case of L-, the perpetrator of homicide with intent, a life sentence would be the probable outcome in most of the ten countries. This would currently take effect as a whole life sentence (that is, with no possibility of release) in Kenya, potentially also South Africa, and as a minimum term of 20 to 25 years in England and Wales, New York State and New South Wales, with a right to apply for release on parole thereafter. In India and Thailand limited remission can be earned after a certain point. Also in Thailand, prisoners can earn eligibility for royal pardon and release as part of a system of intermittent amnesties.

The death penalty remains on the statute book as the sanction for murder in Kenya (where it was ruled unconstitutional by the Supreme Court in 2017), Thailand and India. In Thailand it is also mandated in drug trafficking cases but is generally commuted to life imprisonment if there is a confession. None of the defence lawyers considered a death sentence likely on the facts in L-’s case.

Brazil alone among the ten countries has no life sentence. For homicide, a mandatory minimum of 12 years applies: if judges sentence above this level (up to a statutory maximum of 30 years) they are expected to provide reasons. In Brazil, L- would probably receive a 14 year sentence, the first five or six years to be served in maximum security conditions.

In the Netherlands, life sentences  are almost never used. The most likely outcome for L- in a Dutch court would be a custodial term somewhere between three and twelve years, with a stay in a psychiatric treatment centre afterwards if the court was satisfied that he had a treatable condition. (Otherwise, the custodial term would likely be ten to twelve years, but without a potentially open-ended period in a psychiatric clinic.)

Politicians and governments tend to justify the use of life or very long custodial sentences largely on grounds of deterrence. The same reasoning has supported tougher sentences for repeat offenders, with fairly long custodial terms even when the index offence and the prior convictions did not involve violence. But the research evidence on the (general or specific/individual) deterrent effects of harsh sentences suggests that they are limited; the certainty of detection and punishment are more effective deterrents. Deterrence theory also fails to account for impulsivity, unmet mental health needs, the influence of drugs and alcohol, or the role of poverty and weak social support – all factors known to underlie much offending.

What is beyond doubt is that the introduction of tougher, more arbitrary sentencing regimes greatly increased prison populations, while doing nothing to resolve the underlying and complex drivers of much (re-)offending.